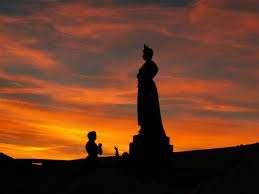 Our Lady of La Salette

Message For The People Of ‘My Beloved France’ – As Well As For The Whole World!

I come to you today as your Lady of La Salette, for I am continuing my messages to the children through you now. It is a very important time in the history of humanity, and I convey these messages with great sorrow and through tears that cloud my eyes – but not my vision for the future of your world and for humanity.

I have charged you in particular with messages for the people of ‘My Beloved France’ as well as for the whole world, and you have recognized your responsibility to speak to the people of France and to convey my messages.

My Son’s Church is for all of humanity, and around your world now, the dark forces of the evil one are attacking in unmerciful ways, not only you who are my brothers and sisters in Christ, but also the very edifices upon which My Son’s Church has been built for all of you to show your respect and reverence for My Son as well as to partake in the sacraments that the Father in Heaven has bestowed upon you – only through My Son’s Church – the very sacraments that are necessary for you to nourish your soul and to raise the level of your very spirit to a heightened plateau where you become powerful prayerful warriors for the Triune God in Heaven.

I call you now to arms as your Heavenly Mother, for now in these final days, the dark one and his minions have unleashed themselves from the bowels of hell to fight the final battle; the battle of all times for the future of mankind here on Earth, for you are being challenged globally now by the most putrid demons of the evil one satan, lucifer, moloch and baal.

In France, I watch as my Son’s Church is being burned and destroyed by the forces of evil and darkness who have invaded France most recently to convert ‘My Beloved France’ from the Christian country that I have prayed for and guided for so many centuries now – only to see My Son’s beautiful edifices burned and pillaged by the evil one’s earthly minions who are misguided in their beliefs with scales over their eyes, believing that they are acting for the Father in Heaven when their true master is the master of lies who is deceiving so much of humanity through occult and demonic beliefs that are not of the Father in Heaven but of the demon in hell.

I pray for you, my children in France, for you are existing in an altered state of suspension from the reality of the terrible evil that has invaded ‘My Beloved France’!

I call upon you to recognize that the destruction of so many of My Son’s Churches in France – particularly of My Beloved Notre Dame de Paris – is the work of the sinister and evil forces of satan.

Woe to those who defame, pillage, and decimate My Son’s Church – not only in France – but throughout the world. For in the end, the enemies of My Son’s Church will find no peace in the afterlife.

I ask all of you My Children of France to rise up once more and defend my Son’s Church throughout France that has been pillaged before, but never destroyed, just as it is being attacked again. But now, my children, you must rise up in France as well as in the rest of the world and defend My Son’s Church, for these are the times that the ancient and modern prophets have warned you about.

Now the time is near. Now, not later, is a time for powerful prayerful warriors to take action and to defend the Church of My Son.

The attacks against my Son’s Church are taking place in many different ways that you may not yet realize, because you are living in the forest of confusion and chaos brought on by your sources of entertainment and journalism, much of which are controlled and manipulated by the minions of satan who are misleading you and causing the scales before your eyes to harden. I call upon you as powerful prayerful warriors to remove the scales from your eyes to challenge the demonically-directed media and news sources that are hell-bent on destroying not only my Sons’ Church but all of humanity.

You must awaken from the slumber which has been cast upon you by evil world leaders and power brokers who are attempting to exercise control over the world at the direction of the evil one. They are calling for a new world order, which is not of God the Father in Heaven, nor of His Son, nor of his Heavenly Mother. The evil one has called upon these minions to suppress and censure your activities now more than ever before in the history of humanity, for the evil one knows his days are short and his minions are now hell-bent on enforcing their demonic new world order plans, so that in the next decade, in their minds, they will have greatly reduced the population of the world to a manageable number of slaves who are only allowed to exist to serve their atheistic, materialistic, and greedy existence. Such is the plan of the evil one.

I call upon all of you to be vigilant of their plans, and through the power of prayer and meditation and the rising up of God’s children, the evil one and his minions will fail, and in the end, the wheat will be separated from this evil chaff, and the world will become a better place in the eyes of the Father in Heaven, because you will be victorious in the end. Thanks be to God!

You must also be aware now that the evil new world order people are fomenting hatred and prejudice throughout the world – again through the media and governments which they control – for they are continually about creating and maintaining endless wars. But now, they are ratcheting up their global war machine to envelop the whole world in a great and final conflagration.

Keep in mind that their intention is to eliminate much of humanity through poverty, crime, racism, conflicts, economic treachery, but most of all through war. It is time now for all of humanity to be vigilant of the evil power brokers who are calling for interventions and insertions of military forces into hotspot areas, for they know that if they are successful, they will create the third world war that will pit citizens against citizens throughout the world, so that you annihilate each other and ultimately suit their plans of reducing the population of the world to those who would be in a manageable servitude to the evil one’s minions.

But now that you know their plan, you must rise up against the tyranny. Call upon your Heavenly Angels and Saints to assist humanity, and you will be victorious in the end. God’s children shall prevail, and the evil one and his minions will finally be cast into the eternal inferno. Peace and serenity will rain across the Earth, and all of humankind shall flourish and prosper in the New Heaven and New Earth that has been promised you.

My Children, my brothers and sisters, I am calling upon you, each and every one of you, who count yourselves among God’s chosen ones. I come to you directly, for the future of My Son’s Church throughout the world will be assured by each and every one of you who recognize yourselves humbly and reverently as the children of God, for it is the children who will save the world from its own destruction.

I have attempted through many of you who have been receiving my messages to influence your religious leaders with God’s messages to humanity, but our Messages from Heaven have fallen on deaf ears.

I called upon the children of La Salette in 1846 to warn the vicars of My Son’s Church of the scandals that would topple the Church, if only for an instant in time. My messages then and my messages now have fallen on deaf ears. But through you, my children, the Messages from Heaven are being heard as it has been intended and as the prophets have stated.

The world will not be saved by the hierarchy of the Church which is now in chaos and disarray but through you, my brothers and sisters, who humbly and reverently answer the call in these times that comes directly from the Father in Heaven through his Son the Redeemer and with my assistance as your Heavenly Mother, as well as through all the good Angels and Saints.

So in these times, your inspiration to save the world from its own destruction will not come from the Church leaders who are in confusion and disarray and blinded by the evil one who is hell-bent in destroying My Son’s Church.

The world will be saved by you, my children, and the time is now to answer God’s call. The time is short and you must be prayerfully vigilant now more than ever before.

This is the Final Call from the Heavens. A Call to Arms! A Call to Don Your Armour!

Through the power of prayer, the world will be saved.

There truly will be justice finally for all who follow the Lord and Savior Jesus Christ.

Finally… Thanks be to God!

Translate This Blog Into Your Language!

Translate Documents On This Blog!

Further down the homepage, I created a new links section titled, NATURAL MEDICINE – FIGHTING VIRUSES, DISEASES, AND PLAGUES, which has all the special writings and important messages from the past few weeks.  God bless!

Commentary – “Will Protestants (and other non-Catholics) be allowed to enter the refuges?”

Garabandal, Only God Knows DVD on sale in the USA, SPAIN AND ALL OF LATIN AMERICA!

*** MUST DOWNLOAD AND READ EBOOK (PDF): The Journey Through The Chambers Of The United Hearts: The Pursuit Of Holiness

*** Wondering if you should become Catholic? Or a Protestant minister seeking full communion with the Catholic Church? Here are resources for you!

*** Our Lady Speaks To Those Who Never Heard The Gospel

*** Is There A God? Does God Exist? Who Is Jesus Christ? What Is The Gospel? (Videos And Resources)

*** Jesus Christ (Isa ibn Maryam) – I Will Forgive Muslims – Islam Jihad Believers, I Give You My Mercy

*** For Love of Your Family and Friends, Please Consider Reading This Book – “The Hell Conspiracy” – By Laurie Ditto

Mary, Refuge of Holy Love, pray for us! Click the image below for the Daily Holy Love Prayers!

Click the Image Below To Learn About the Rosary of the Unborn! Save Children from Abortion!

HEALING AND HOPE AFTER ABORTION (Links)

Reasons To Choose Life in the Womb! Be Pro-life! Click the image below!

THE BOOK OF TRUTH - MARIA DIVINE MERCY - Other Languages (Links)